In taping on uneven or sloping ground, it is standard practice to hold the tape horizontally and use a plumb bob at one or perhaps both ends. It is difficult to keep the plumb line steady for heights above the chest. Wind exaggerates this problem and may make accurate work impossible.

On steeper slopes, where a 100-ft length cannot be held horizontally without plumbing from above shoulder level, shorter distances are measured and accumulated to total a full tape length. This procedure, called breaking tape, is illustrated in Figure 6.3. As an example of this operation, assume that when taping down slope, the 100-ft end of the tape is held at the rear point, and the forward tapeperson can advance only 30 ft without being forced to plumb from above the chest. A pin is therefore set beneath the 70-ft mark, as in Figure 6.4.

The rear tapeperson moves ahead to this pin and holds the 70-ft graduation there while another pin is set at, say, the 25-ft mark. Then, with the 25-ft graduation over the second pin, the full 100-ft distance is marked at the zero point. In this way, the partial tape lengths are added mechanically to make a full 100 ft by holding the proper graduations, and no mental arithmetic is required. The rear tapeperson returns the pins set at the intermediate points to the forward tapeperson to keep the tally clear on the number of full tape lengths established.To avoid kinking the tape, the full 100-ft length is pulled ahead by the forward tapeperson into position for measuring the next tape length. In all cases the tape is leveled by eye or hand level, with the tapepersons remembering the natural tendency to have the downhill end of a tape too low. Practice will improve the knack of holding a tape horizontally by keeping it perpendicular to the vertical plumbbob string. 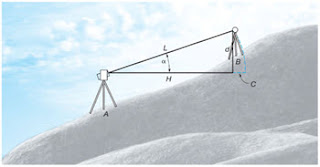 Taping downhill is preferable to measuring uphill for two reasons. First, in taping downhill, the rear point is held steady on a fixed object while the other end is plumbed. In taping uphill, the forward point must be set while the other end is wavering somewhat. Second, if breaking tape is necessary, the head tapeperson can more conveniently use the hand level to proceed downhill a distance, which
renders the tape horizontal when held comfortably at chest height.

In measuring the distance between two points on a steep slope, rather than break tape every few feet, it may be desirable to tape along the slope and compute the horizontal component.This requires measurement also of either the altitude angle or the difference in elevation d (Figure 6.5). Breaking tape is more time consuming and generally less accurate due to the accumulation of random errors from marking tape ends and keeping the tape level and aligned for many short sections.

In Figure 6.5, if altitude angle is determined, the horizontal distance between points A and B can be computed from the relation where H is the horizontal distance between points, L the slope length separating them, and the altitude angle from horizontal, usually obtained with an Abney hand level and clinometer (hand device for measuring angles of inclination). If the difference in elevation d between the ends of the tape is measured, which is done by leveling (see Chapter 5), the horizontal distance can be computed using the following expression derived from the Pythagorean theorem: Another approximate formula, obtained from the first term of a binomial expansion of the ythagorean theorem, may be used in lower-order surveys to reduce slope distances to horizontal.

In Equation (6.2b) the term d2/2L equals C in Figure 6.5 and is a correction to be subtracted from the measured slope length to obtain the horizontal distance. The error in using the approximate formula for a 100 ft length grows with increasing slope. Equation (6.2b) is useful for making quick estimates, without a calculator, or error sizes produced for varying slope conditions. It should not be used as an alternate method of Equation (6.2a) when reducing slope distances.