Instruments used for differential leveling can be classified into four categories: dumpy levels, tilting levels, automatic levels, and digital levels. Although each differs somewhat in design, all have two common components: (1) a telescope to create a line of sight and enable a reading to be taken on a graduated rod and (2) a system to orient the line of sight in a horizontal plane. Dumpy and tilting levels use level vials to orient their lines of sight, while automatic levels employ automatic compensators. Digital levels also employ automatic compensators, but use bar-coded rods for automated digital readings. Automatic levels are the type most commonly employed today, although tilting levels are still used especially on projects requiring very precise work. Digital levels are rapidly gaining prominence. These three types of levels are described in the sections that follow. 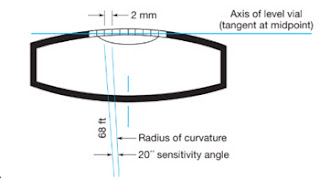 Dumpy levels are rarely used today, having been replaced by other newer types. They are discussed in Appendix A. Hand levels, although not commonly used for differential leveling, have many special uses where rough elevation differences over short distances are needed. They are also discussed in this chapter. Total station instruments can also be used for differential leveling. These instruments
and their uses are described in Section 8.18.

Electronic laser levels that transmit beams of either visible laser or invisible infrared light are another category of leveling instruments. They are not commonly employed in differential leveling, but are used extensively for establishing elevations on construction projects.

The telescopes of leveling instruments define the line of sight and magnify the view of a graduated rod against a reference reticle, thereby enabling accurate readings to be obtained. The components of a telescope are mounted in a cylindrical tube. Its four main components are the objective lens, negative lens, reticle, and eyepiece. Two of these parts, the objective lens and eyepiece, are external to the instrument, and are shown on the automatic level illustrated in Figure 4.9.

Level vials are used to orient many different surveying instruments with respect to the direction of gravity. There are two basic types: the tube vial and the circular or so-called “bull’s-eye” version. Tube vials are used on tilting levels (and also on the older dumpy levels) to precisely orient the line of sight horizontal prior to making rod readings. Bull’s-eye vials are also used on tilting levels, and on automatic levels for quick, rough leveling, after which precise final leveling occurs.

The principles of both types of vials are identical. A tube level is a glass tube manufactured so that its upper inside surface precisely conforms to an arc of a given radius (see Figure 4.10).The tube is sealed at both ends, and except for a small air bubble, it is filled with a sensitive liquid.

The liquid must be nonfreezing, quick acting, and maintain a bubble of relatively stable length for normal temperature variations. Purified synthetic alcohol is generally used. As the tube is tilted, the bubble moves, always to the highest point in the tube because air is lighter than the liquid. Uniformly spaced graduations etched on the tube’s exterior surface, and spaced 2 mm apart, locate the bubble’s relative position.The axis of the level vial is an imaginary longitudinal line tangent to the upper inside surface at its midpoint. When the bubble is centered in its run, the axis should be a horizontal line, as in Figure 4.10. For a leveling instrument that uses a level vial, if it is in proper adjustment, its line of sight is parallel to its level vial axis. Thus by centering the bubble, the line of sight is made horizontal.

Its radius of curvature, established in manufacture, determines the sensitivity of a level vial; the larger the radius, the more sensitive a bubble. A highly sensitive bubble, necessary for precise work, may be a handicap in rough surveys because more time is required to center it. A properly designed level has a vial sensitivity correlated with the resolving power (resolution) of its telescope. A slight movement of the bubble should be accompanied by a small but discernible change in the observed rod reading at a distance of about 200 ft. Sensitivity of a level vial is expressed in two ways: (1) the angle, in seconds, subtended by one division on the scale and (2) the radius of the tube’s curvature. If one division subtends an angle of at the center, it is called a bubble. A bubble on a vial with 2-mm division spacings has a radius of approximately 68 ft.4 The sensitivity of level vials on most tilting levels (and the older dumpy levels) ranges from approximately 20" to 40".